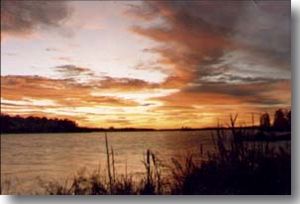 No one has discovered John Cheek's birthplace or the names of his parents.  Some researchers assume that he was the son of an Anthony Cheek who is found in a few records from "Old Rapp." and Lancaster Counties from 1658 to 1664.  However, John may or may not have been related to Anthony.  The fact is, we know virtually nothing about John Cheek's origins.  He could have been a recent immigrant, or he could have been born in Virginia or arrived as a young child -- there is very little evidence one way or the other.

The Virginia Company encouraged settlement by granting "headrights" of 50 acres of land for each person imported into the Colony.  The names of the "headrights," who were often indentured servants, are listed in the land patent books.  There is a John "CHICKETT" listed as a headright of Mr. John JOY (or IVY) in a land patent dated Sept. 20, 1683, for 200 acres in St. Stephens Parish of New Kent Co., VA.  (Patent Book 6, p.321.)  St. Stephen's Parish later became part of King & Queen County (est. 1691), which is next to Old Rapp./Essex County.  So this would be in the right geographic area and generally in the right time frame to be our John Chick or Cheek.  Even though the land patent was not granted until 1683, four years after "our" John Cheek shows up in Old Rapp. County, the people used as headrights could have arrived a several years earlier.  But of course this also assumes there was a spelling error in the land patent record, or John changed his name from Chickett to Chick/Cheek.

There is also a John Cheek listed as a headright of Mr. Samuel CHAPPELL in a land patent dated Oct. 26, 1696, for 218 acres in Warwick Co., VA.  (VA Land Patent Book No. 9, p.42.)  Mr. Chappell's patent was issued 17 years after "our" John Cheek first appears in Old Rapp. County, so it may refer to a different individual.  However, a 17-year gap is not entirely outside the realm of possibility.  Sometimes headrights were sold several times, or held for years before being used.

Although we don't know for certain when "our" John Cheek arrived in Virginia, he must have become a landowner by 1690, when he served on a jury in Old Rapp. County.  Jury service was a privilege reserved for "freeholders" who were male English citizens with a minimum amount of land and personal assets.  Unfortunately, John Cheek didn't obtain his land by patent, and there is no surviving deed or other record of the purchase.

From various records it appears that John Cheek lived in South Farnham Parish and his neighbors included the Dyer and Gatewood families.  The final record of John Cheek's life dates to 1699, when he witnessed the will of his neighbor Andrew Dyer.  He was deceased by 1709 when the will was recorded, according to a notation in the will book.  (John F. Dorman, Essex Deeds and Wills No. 13, 1701-1711, p.66.)  This proves that John Cheek died sometime between 1699 and 1709.  He is not listed on the 1704 "Quit Rent" roll of Essex Co., VA, so it is possible he died before 1704, although the rolls are known to be incomplete due to tax dodging and administrative errors.  "Quit rents" were a kind of property tax paid to the king, and many people tried to get out of paying them.

The next generation of Cheeks in the Essex County records include another John, Richard, William, and Robert.  These individuals are presumed to be the sons of the elder John.  However, some uncertainty will always exist, because no will or other documentation concerning the John Sr.'s heirs has ever been found.