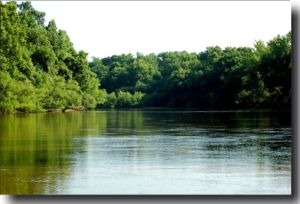 ohn Cheek was one of the middle sons of Richard Cheek of Beaufort Co., NC, and is named in Richard's 1743 will.  There are no further records of John Cheek in Beaufort or Edgecombe Counties.  However, he may be the John Cheek who appears on the 1745 tax list of Bladen County, NC.  Bladen County was established in 1734 and originally encompassed a large frontier territory extending west from Livingston's Creek on the Cape Fear River "to the bounds of government."  Old Bladen was the parent of dozens of other counties including Anson (formed from Bladen in 1750) and Montgomery (formed from Anson in 1779).

By the 1750's John Cheek owned land on both sides of the Pee Dee River in Anson and Montgomery Counties, at the mouth of Brown Creek.  He seems to have had at least two sons, John and Randolph, and daughters named Elizabeth, Sarah, and Hannah.  John's date of death is uncertain because most of Montgomery County's early records were destroyed in a courthouse fire in 1842.  However, he is probably the John Cheek, Sr., who appears on the 1782 tax list of Montgomery Co., NC, with 1,182 acres of land.  He probably died before 1790.

by Jean Peppers.)  The Van Hoose and Cheek families were closely associated in Anson County.  Randolph Cheek (son of John Cheek) is believed to have married John Van Hoose's daughter Margaret, and they had a son named Valentine Cheek, which was the name of Margaret Van Hoose's brother.  Valentine Cheek named one of his sons Jesse Van Hoose Cheek.  So, it's certainly reasonable to conclude that Hannah, the wife of John Van Hoose, was related to John Cheek of Anson/Mongtomery County, NC.

Unfortunately, there are no other records of the Cheek surname in Lancaster Co., PA, during the relevant time period, and Hannah's parents have never been identified.  "Cheek" is not a typical German name and it is not found among any of the German settlers of Tulpehocken Township, where the Van Hoose family lived.  Also, John Cheek was already in Bladen/Anson County in 1746, and the Van Hooses did not arrive until several years later.  There is a similar German surname, SCHICK, found in Pennsylvania records.  According to researcher Carol Rodriguez, John SCHICK sponsored a baptism on Oct. 2, 1748, at the Millbach Reformed Congregation in Heidelberg, Lancaster Co., PA.  (Source: Pennsylvania Church Records of Adams, Berks, and Lancaster Counties 1729-1881.)  However, it's unknown whether this John SCHICK had any connection to Hannah CHEECK who married John Van Hoose.

Although the Pennsylvania records are intriguing, I still believe that John Cheek could be the son of Richard Cheek of Beaufort County, NC.  (Of course, maybe Richard's son John Cheek traveled to Pennsylvania for some reason and met the Van Hooses, before returning to North Carolina.  It's a speculative theory, but not outside the realm of possibility.  It's even been suggested that Hannah CHEECK might be Ann Cheek, Richard Cheek's youngest daughter.)

The evidence: Richard Cheek of Beaufort County, NC, had a son named John, which is proven by his will.  John is completely absent from the records of Beaufort and Edgecombe Counties after 1743, nor is he found in Granville, Bute, or Orange County with any of his brothers.  Of course it is possible that he died young.  However, another piece of evidence comes from the Swearingen family.  The Swearingens were neighbors of the Cheeks in Edgcombe and Beaufort County (see, e.g., Edgecombe DB 1, pp.19-20).  Several Swearingens moved to Anson County and settled on Cheek Creek (see, e.g., deed from Philemon Terrell to Van Swearingen, Nov. 12, 1766, referring to land on "Cheek Creek").  Pioneer families often migrated together, or settled near people they already knew from home.

Samuel Swearingen, Jr., had a son named "Richard Cheek Swearingen," which suggests there may have been a Cheek-Swearingen intermarriage.  Samuel "Swaringen" and John Cheek are listed as chain carriers in a survey made for a tract of land granted to John Cheek in 1782 in Montgomery Co, NC (Grant No. 15, Book 43, p.184).  Chain carriers were usually family members or close friends of the person who obtained the land grant.  Being a chain carrier was exhausting work, requiring hours in the hot sun, dragging a 66-foot surveying chain through dense underbrush, forest and swamps.

Another piece of evidence is the distinctive first name "Randall" or "Randolph."  Richard "of Beaufort" Cheek had a son named Randolph and this name is found in several generations of Richard's descendants.  Randall/Randolph was a fairly unusual first name in the 1700's -- there are only 54 examples listed in the 1790 census index for the entire state of North Carolina.  So when the name "Randolph" appears in a family with other possible connections to Richard "of Beaufort" Cheek, it seems like more than a coincidence.

Finally, DNA testing conducted through the Cheek/Chick DNA Project shows that several possible descendants of John "of Anson" Cheek are closely related to descendants of Richard "of Beaufort" Cheek.  Although DNA testing can't pinpoint a specific ancestor, there is a high probability, based on the DNA results, that these individuals had a common male ancestor within the last 12 generations (roughly 300 years).

Many thanks to Pauline Brandy for her efforts in finding the following Anson County records!

Note: The "headright" law allowed settlers in North Carolina to claim a certain amount of vacant land per person.  John Cheek would have been entitled to headrights if he was born in Virginia or another colony.  John CLARK, who recorded the headrights for John Cheek, was a large landowner in Bladen (Anson) County who accumulated more than 20 land patents along the Pee Dee River between 1740 and 1752.  He sold many of these parcels to other settlers.  It is possible that John Cheek sold or traded his headrights to John Clark, perhaps in exchange for a parcel of land already owned by Clark.

Note: The above land entry is consistent with the location of "Cheeks Creek" which is a branch of the Little River on the northeast side of the Pee Dee River in what is now Montgomery Co., NC. 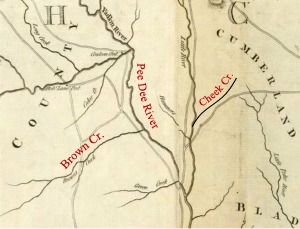 Geographic Note: Anson County was formed from Bladen County in 1750.  Anson originally included the areas east of the Pee Dee and north of Rocky River which later became part of Richmond and Montgomery Counties.

Nov. 24, 1764. The North Carolina Governor's Council in Wilmington, NC, "Read the Petition of John CHEECK setting forth that he is possessed of a Patent for two hundred Acres of Land in Anson County, That the surveyor has by mistake mentioned the beginning corner to be below the mouth of Williams Creek Although in fact the said Tree stands above the mouth of the Creek, which can be proved by a living evidence who was present at the survey and praying relief &c.  Ordered that there be a warrant of Resurvey of the said Land to be returned to the next Court of Claims." (Colonial Records of NC, Vol. 6, p.1087.)

Oct. 30, 1765. Anson Co., NC. Elizabeth CHEEK, Sarah CHEEK, and Hannah CHEEK each obtain a land grant in Anson County. They were presumably unmarried in order to obtain land grants in their own names. They were likely the daughters of John CHEEK, Sr. In two subsequent deeds, dated Oct. 15, 1784, and July 28, 1786, there is a reference to property on Hurricane Creek adjoining the line of surveys made for "one of" John CHEEK's daughters (Anson DB H, p.30 and p.106).

Note: Joel McClendon or McLendon was originally from Moore Co., NC.  Before moving to Anson around 1769, he lived on McLendon's Creek, a tributary of the Deep River in upper Moore County.  The McLendon Cabin

which Joel built abt. 1760 has survived more than 200 years and is now a historic site.  Based on the location of the cabin, Joel McClendon probably lived about 15 miles from Randolph Cheek and Robert Cheek of Moore County whose plantations were located on the Deep River and Tyson's Creek.  John Cheek of Anson Co., NC, may have been the brother of Randolph and Robert Cheek of Moore County.  Although there is no record of any associations between the McLendons and the Cheeks in Moore County, they are connected in Anson County.  Joel McLendon's sister Jemima McLendon was married to John Cheek's neighbor Benjamin Dumas (another migrant from Moore to Anson County), and John Cheek's son Randolph Cheek sold land to Joel McLendon in 1769.

July 1774. John CHEEK and others ordered to work on the Anson County road from Clark's Creek to the ford on Little River. 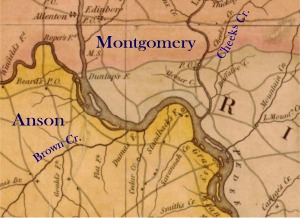 Anson, Montgomery, and
Richmond Counties, North Carolina
from an 1833 map

Geographic Note: Montgomery & Richmond Counties were formed from the Anson County in 1779.  Most of the early records from Montgomery County were destroyed in a courthouse fire in 1842.

Note: In 1779, John Cheek appears on a list of voters in Montgomery Co., NC, which means he was a freeholder owning at least 50 acres of land.  However, for some reason he is not included on the Montgomery County tax lists in either 1779 or 1780.  The 1780 tax list of Montgomery County does have a George Lamb CHEEK and a Fraseer CHEEK, but their relationship to the other Cheeks in the area is unknown and their names never appear again in the records.  John Cheek, Sr., and John Cheek, Jr., are found in both Anson and Montgomery Counties beginning with the 1782 tax list.

Dec. 26, 1794. Montgomery Co., NC, Land Entry 1529. Robt J. STEEL entered 130 acres on Cheeks Creek adj. a tract belonging to "Robt. Livret CHEEK."  There are no other records of Robert Livret Cheek in Montgomery Co., NC.  However, in the 1787 State Census of Montgomery Co. there is a family named LOCKETT, or possibly PICKETT or LEVERETT listed between John CHEEK and John SWEARINGEN, and a few households away from Vallentin VANHOOSE.  (Thanks to Carol Rodriguez for this information!)  Therefore, it seems likely that Robert Livret Cheek was related to the family of John "of Anson" Cheek.

There is a John Cheek in the 1790 census of Anson County, NC, and Montgomery County, NC, in 1800, but he appears to be a younger John Cheek, possibly even young enough to be a third generation ("John No. 3").  His household in 1790 consisted of 1 white male over age 16, 5 white males under 16, and 4 white females.  In other words, there were several underage children in the household, which implies a younger family.

In any event, one possibility is that John Cheek, Sr., died before 1790.  His (presumed) son, John Jr. ("John No. 2"), may have moved across the state line into South Carolina (see next page)  and a grandson, "John No. 3," remained on the family's land in Anson and Montgomery Counties.  "John No. 2" is listed in the 1790 census of York District, South Carolina.  He probably settled in the region along the North Carolina-South Carolina border where Mecklenburg County, NC, the Catawba Indian Reservation, and York and Lancaster Districts in South Carolina all came together.  "John No. 2" may have died before 1800, and his widow and sons are subsequently found in records of both York and Lancaster Districts as well as Mecklenburg County, NC.

By 1820, most of the descendants of the original John Cheek Sr. seem to have departed for Tennessee and other points west.