ichard Cheek was born around 1780 in Orange County, NC.  He was 70 years old in the 1850 census.  Richard's relationship to his father, Robert Cheek, Sr., is proven by court documents concerning a lawsuit called McKerral vs. Cheek filed in Orange Co., NC, in 1823.  The lawsuit arose out of a dispute over the title to land formerly owned by Robert Cheek, Sr.  Court documents conclusively identify four of Robert's sons: James, Robert Jr., John, and Richard.  Click here for more information about the lawsuit. (NC Archives Folder No. CR.07.325.136, "Civil Actions Concerning Land", 1823 folder.)

Richard Cheek and his wife Jane "Jennie" Andrews posted a marriage bond in Orange Co., NC, on July 3, 1805.  They moved to Ashe County sometime between 1817 and 1820.  Richard was the youngest of nine children, and his father was not wealthy.  Richard probably had limited opportunities to better himself in Orange County.  Also, there is evidence of a nasty dispute within the family, possibly over the distribution of Robert Sr.'s remaining land.  Around 1816, Richard Cheek's wife Jane accused Richard's brother-in-law Charles JONES of attacking her and beating her with a sassafras stick.  The minutes of the trial refer to "great animosity" between the parties.  (NC Archives Folder No. CR 073.326.1, Criminal Action Papers, undated folder)  (Click here for more info.)  In 1817, Richard Cheek and Charles Jones both obtained judgments against Robert Sr., which resulted in the sale of Robert Sr.'s land.  It was this sale that led to the McKerral v. Cheek lawsuit several years later.  Although none of the court documents reveal the source of the dispute between Richard Cheek, Charles Jones and Robert Sr., one plausible explanation is that Robert Sr. had promised his remaining land (125 acres) to both Richard Cheek and Charles Jones, possibly in return for support in his old age.  Perhaps there was a falling-out and Robert Sr. refused to make good on his promise.

How do we know that Richard Cheek of Orange County, NC, moved to Ashe (Alleghany) County?  One piece of direct evidence is the death certificate of Richard's granddaughter Pinkey Cheek (wife of Samuel Galyean), who died in 1948.  Pinkey's death certificates states that her father Richard M. Cheek was born in Orange County, NC.  In addition, a number of relatives of Richard's wife's Jennie (Andrews) settled in Alleghany County or in neighboring Grayson County, VA, including her brothers John Andrews, Starling Andrews, and William Andrews, Jr., and her older sister Elizabeth who married David Edwards, Jr.

Richard Cheek first appears in the census in Ashe County, NC, in 1820.  On Oct. 21, 1823, he purchased 200 acres on the Little River and Crab Creek from Nimrod Fender.  (Alleghany Co., NC, Deed Book A, p.17.)  This land was located in the northeastern corner of Ashe County near the Virginia line.  The area became part of Alleghany County in 1859.

Richard and Jennie Cheek prospered in Alleghany County, having eight children and over 65 grandchildren.  Richard wrote his will on Dec. 27, 1864, and he died February 2 or 3, 1865.  His estate was not probated until April 1866, after the end of the Civil War.  Some information about his last days comes from the journal of his neighbor Morgan EDWARDS (son of Archibald Edwards).  Morgan was one of the wealthier and more educated men in the area and therefore was often called upon to write wills and so on.  Morgan kept a cryptic journal of his daily activities.  The following is from a transcribed copy of the journal in the possession of Leon Kerns.  "M. Cheek" probably refers to Meredith Cheek:

From these diary entries, it appears that Meredith took his father to see Morgan Edwards on Dec. 25, 1864, in order to prepare a will.  Richard Cheek subsequently died on the night of Feb. 2-3, 1865. 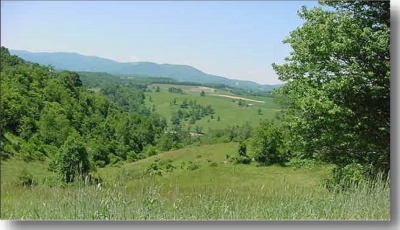